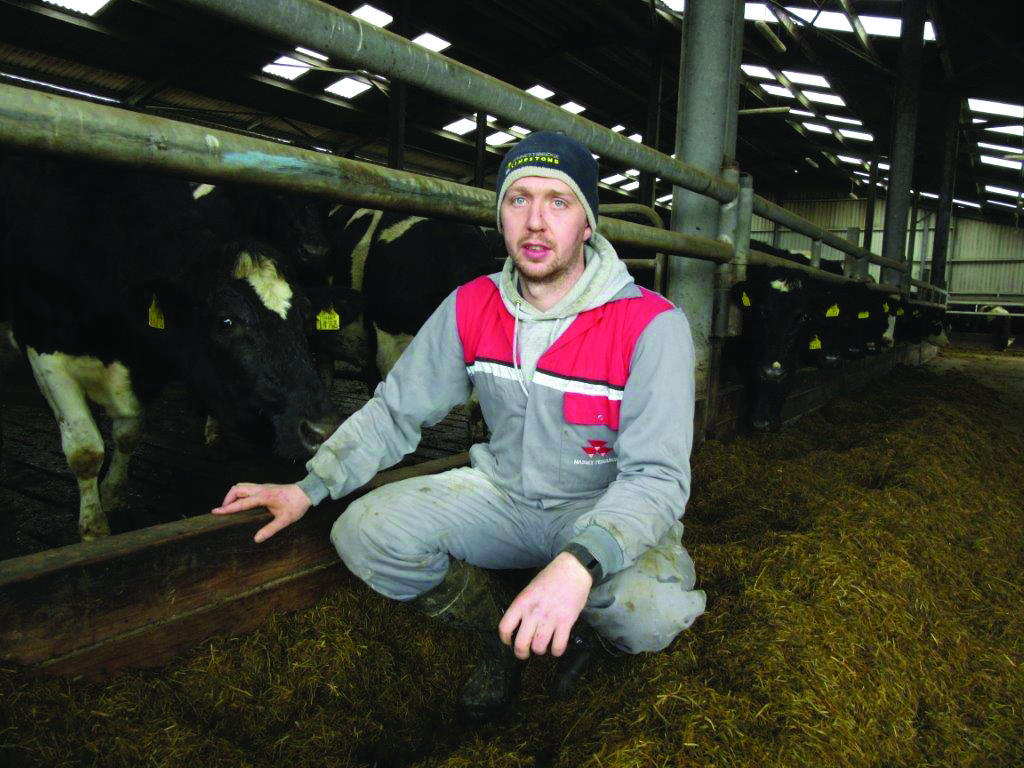 John farms in partnership with his parents, Maurice & Helena, at Lismateigue, Knocktopher, Co. Kilkenny. Together they run a spring-calving dairy enterprise alongside a successful dairy calf to beef operation.

Cows typically start to calve in mid January and John aims for a compact calving period.

“This spring we’ll calve down 210 dairy cows, including 20 per cent heifers,” John explained. “Fertility is generally good, with only 13 empty out of 223 served in 2016, and 80 per cent of the cows will calve before March 17th. All calves are reared on the farm, with British Friesian heifers being reared as replacements and British Friesian bull calves and Aberdeen Angus crosses being reared in our beef enterprise.”

Grazed grass forms a big proportion of the herd’s ration and John aims to include grass into the cows’ diet early in the spring. The Powers aim to produce high DMD grass silage as this is the only forage fed to milking cows while they are still indoors and they continue to feed silage while cows are being transitioned to grazing through the spring. Cows are fed a compound feed through the parlour and are stepped up to a flat rate of 5 kg/head/day post-calving and then are fed at levels of 5-7kgs depending on milk yield and grass supply.

Grass is introduced as weather and grazing conditions permit and levels of grass in the diet are built up gradually. John’s grazing block extends to 130 acres and he manages grass on a rotational basis, budgeting grass according to supply and demand from the milking herd.

“We generally start the second round of grazing in early April and we used to find that average milk butterfat percentage dropped considerably around this time, down to around 3.3 per cent,” he explained. “We thought that a lack of fibre was the issue, so we tried offering the cows straw, but the results were disappointing and butterfats didn’t improve.”

Following advice from Michael Barron and Heather Peppard at Brett Brothers, in the spring of 2016 John decided to add Actisaf live yeast to his cow diet, and introduced it ten days before the end of the first rotation, at a rate of 4-6 grams per head per day.  The Actisaf was incorporated within Brett’s Supreme Breeder nut to allow a flexible feeding rate. Cows continued to receive grass silage at this time, as they normally would at that time of year.

“Actisaf significantly improves rumen efficiency, leading to increased digestion and utilisation of grass, and promotes a stabilising effect on rumen pH, reducing the threat of sub-acute rumen acidosis or SARA, and improving milk yield and milk solids,” explained Heather. “Milk solids are often affected on lush spring grass as a result of digestive upset in the cow, and so it is important to be proactive and add Actisaf early in the spring, ideally before turning cows out, rather than waiting until a problem occurs.”

“Actisaf certainly helped improve milk solids,” John concluded. “Although milk yields were down slightly due to the poor weather and a large proportion of heifers in 2016, butterfats were consistently between 0.12 and 0.26 higher [April 2016: 3.87% vs April 2015: 3.61%] and we didn’t see the variability in butterfat that we would typically see during the grazing season. We also noticed that dung consistency was better, with firmer dungs, which suggested better rumen function. We will definitely be using Actisaf again in 2017.”