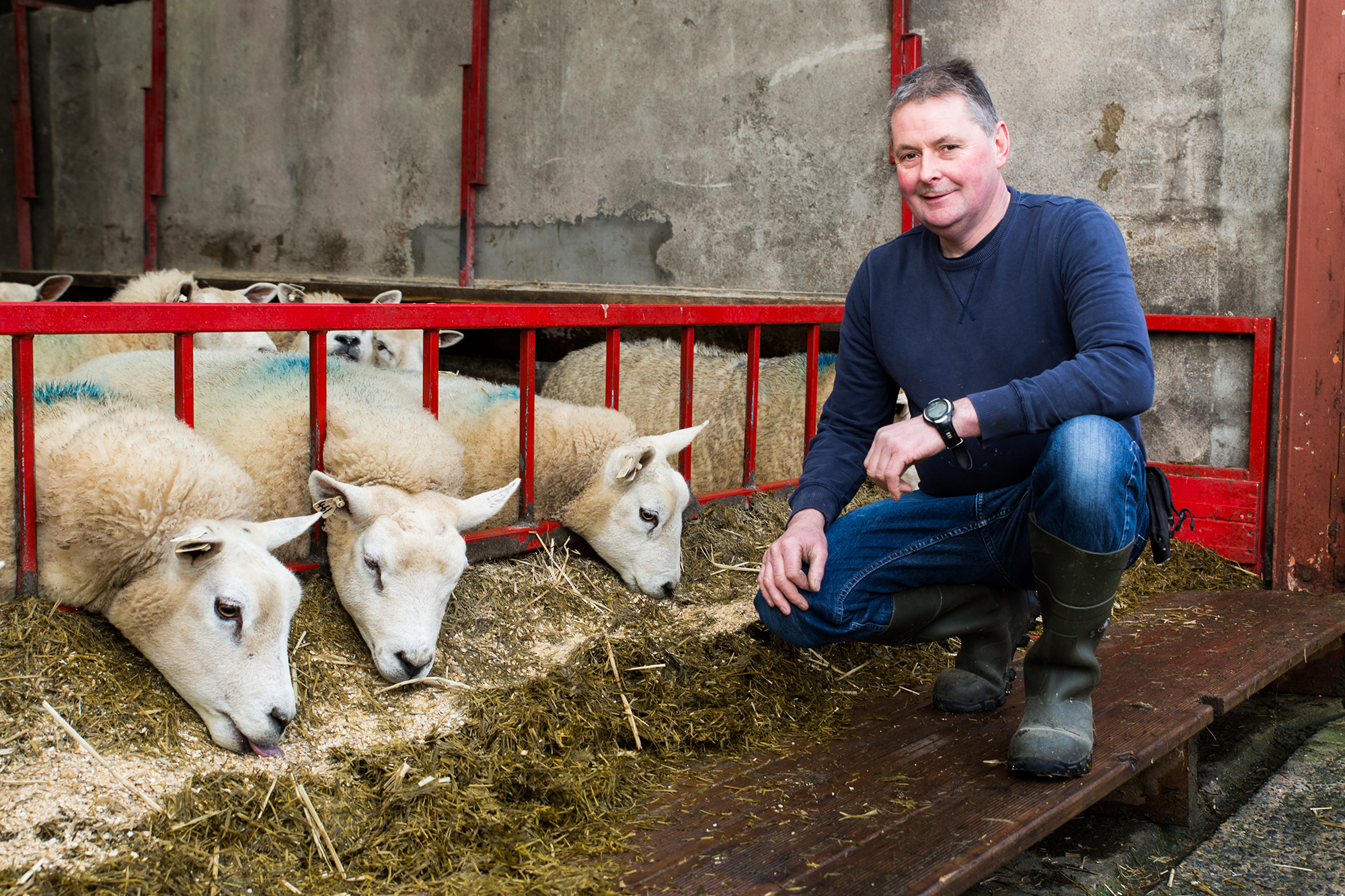 Ian Hanna farms with his brother Wesley, grazing beef cattle and Texel cross sheep, (including 200 ewes and 85 ewe lambs), on their lowland farm near Dromore, Co Down. Each year they finish an average of 400 lambs, which are sold through the local market to supply local butchers.

Every aspect of flock management, from breeding to nutrition, is targeted at producing high quality E and U grade lambs.

“As a closed flock, tups are the only sheep bought onto the farm, and they are selected based on confirmation,” Ian explains. “We typically bring in two to three new rams every year and keep them for five or six years, which gives us a good rotation of genetics.

“During tupping season, we split ewes into two groups with four tups in each and put three tups in with the ewe lambs. We want ewes to lamb within three or four days of each other and all finished by 1st May at the latest, so we aim to have 80% of the ewes in lamb within three days of introducing the tups around 1st September. Any ewes not in lamb at that time have one more cycle with the tups - if they don’t scan after that, they’re gone.”

Ian grazes all ewes and ewe lambs until six weeks prior to lambing, around 13th January, and provides self-access minerals in the field. To maintain good grass quality, fields are re-seed every five years and sheep are moved onto fresh grass every 14-21 days.

“When ewes are brought indoors, we divide them up by how many lambs they are carrying, with ewes bearing twins and triplets going into separate sheds,” continues Ian. “We keep all of them on concentrate at this point in order to get their milk down. As far as I’m concerned, it’s the only way to ensure the lambs get off on the right foot.”

During the pre-lambing period, ewes with single lambs are fed concentrate feed at a rate of 0.7kg/day, those with twins get 1.2kg/day and those with triplets receive 1.4kg/day. Feed rates are increased post-lambing, based on body condition and lamb numbers, to 0.9kg/day, 1.4-1.6kg/day and around 1.4-1.8 kg/day respectively.

“We house ewes and lambs for 12-15 days post-lambing to keep an eye on them and then put them out to grass when the lambs are strong enough,” says Ian. “The ewes are fed the same amount of concentrate while grazing that they received inside in order to support milk production. We start taking the older ewes off concentrate after five or six weeks but keep first time lambers on it all summer to give them a bit of extra nutritional support.”

Once lambs start to show an interest in the ewes’ feed, they are given access to creep feed and Ian gradually reduces the ewe’s feed until lambs are eating enough pellet on their own.

“We wean lambs at 30kg, split them into batches of 60 or 70 according to weight and finish them on grass and concentrate, which contains Actisaf live yeast” adds Ian. “We sell on finished lambs once they have achieved 41-42kg liveweight (22kg deadweight).”

Ian decided to try feeding Safmannan and Actisaf to his flock in preparation for the 2020 lambing season following discussions with Jane Lyness from his feed supplier, R&J Lyness.

“Ian and Wes’s flock is a great example of how good planning and nutrition translate to a profitable sheep business,” says Jane. “Their knowledge and attention to detail allow them to produce big, healthy and exceptional quality lambs for a premium market. When Ian came to us looking for ways to improve further, Actisaf and Safmannan were an easy suggestion due to the strong results we consistently see in ewes and lambs supplemented with these products.”

Safmannan supports immunity and binds to specific pathogens in ewes; providing much needed health and performance benefits around lambing time, when a ewe is under the most stress. Feeding Safmannan also results in up to 25% higher IgG levels in colostrum, which helps lambs get off to a good start and improves lamb performance later in life.

Actisaf supports the rumen microbes that stabilise rumen pH, reduce build-up of lactic acid and digest fibre. Trial results in lambs have shown that ActisafÒ improves average daily gain by 10%, feed conversion rate by 11% and increases carcass weight by up to 1.2 kg per lamb, over a typical finishing period.

“Our flock has always performed well, but we are constantly looking for ways to improve,” Ian concludes, “and the results we saw last year showed that Actisaf and Safmannan did just that. The Actisaf has made a big difference in our lambs, and they certainly had fewer problems last year. They grew really well, had better vigour and needed less time to reach their finishing weights, which I was really happy with.

“With Safmannan in the ewe diets, their milk is good quality and came down well, which meant that our lambs have gotten off to a strong start. The ewes have also scanned in better than ever before at 186% for the 2021 season, compared to 176% the previous year.”

"When Ian came to us looking for ways to improve further, Actisaf and Safmannan were an easy suggestion due to the strong results we consistently see in ewes and lambs supplemented with these products.”