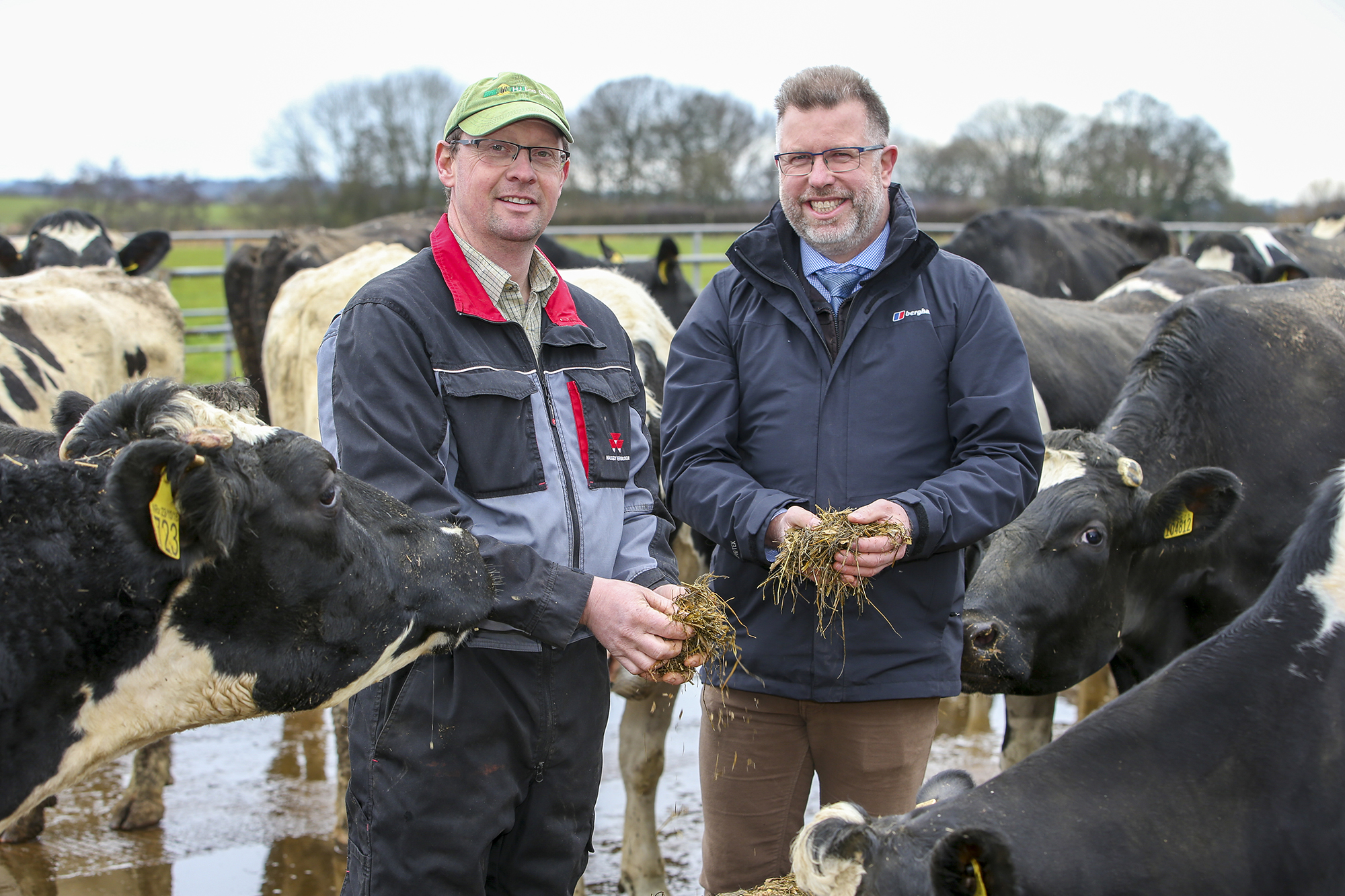 On 600 acres near Market Drayton, Jon milks 400 autumn-calving Holstein Friesians and Norwegian Red crosses that yield 7,600L at 4.2% butterfats and 3.3% protein, with 4,000L coming from forage. Also focused on driving fertility, he keeps a tight 12-week breeding block with 60% in calf in the first 6 weeks. Cows are dried off in June or July and placed in paddocks where they calve out on grass.

The rotational grazing platform comprises of 350 acres of perennial ryegrasses, and cows are turned out around 1st of March, remaining on grass until 1st of November. Maize is grown on 70 acres, and a separate block of 110 acres is dedicated to multi-cut silage. To ensure productivity from grass, Jon monitors grass growth carefully to manage grazing rotations, reseeding and other inputs.

“We measure our grass weekly and use that data to manage everything from feed to fertiliser,” he explains. “I really enjoy walking through the fields with the plate metre – it gives me time to think and see for myself how the grass and soil is doing.”

The land at Friend Farms was previously used for arable and potato production, so Jon includes maize in the 10-year reseeding cycle to help reset the soil before planting new grass seed, starting with poorer condition fields.

“In my opinion, you have to re-seed grass in order to get the yields you want. Our newer fields are outperforming the rest, so it’s been worth the effort,” Jon adds. “We see 14 tonnes DM/ha in a typical season, and despite the challenges last year we still were able to achieve 12 tonnes DM/ha.”

HJ Lea Oakes Feed Advisor Phil Jackson has supported Jon from the beginning and believes that the key to Jon’s success lies in his planning. “Jon’s progress has been brilliant over the past few years, and that’s due to the fact that he made a plan and stuck to it. He feeds the right amount of concentrate for yield potential, pulling back during grazing to make the grass work him.”

Cows are fed two different concentrates depending on the time of year, both of which contain Actisaf live yeast to support feed efficiency and promote rumen function. Ahead of grazing turnout, cows are introduced to Actigraze, a lower protein HDF nut designed to complement grazed grass, which they are fed throughout the grazing period.  In October the herd is transitioned onto Premier 18, a high energy feed containing wheat, soya and beet pulp to support early lactation.

“Our Actigraze line is a great feed for dairy farmers wanting more milk from grass, achieving excellent results for the price,” Phil adds. “The range includes Actisaf at a higher rate for supplementing cows at grass, which works by scouring oxygen in the rumen and getting the most out of spring grass.”

“We have included Actisaf in the cows’ diet for the last 6 years and it is in their feed year-round,” Jon says. “By keeping the rumen functioning well, the cows can utilise the grass better and are able to manage diet changes like grazing turnout more easily. It’s worked brilliantly to drive performance from forage and keeps the cows happy in our system.

“Cows don’t like change. It’s important that any changes to their management are made slowly so they can cope, and Actisaf plays a part in helping them do that. We’ve never gone off using it as it’s been part of the plan from the start – if it isn’t broken, don’t fix it!”

“We have included Actisaf in the cows’ diet for the last 6 years and it is in their feed year-round,” Jon says. “By keeping the rumen functioning well, the cows can utilise the grass better and are able to manage diet changes like grazing turnout more easily. It’s worked brilliantly to drive performance from forage and keeps the cows happy in our system."