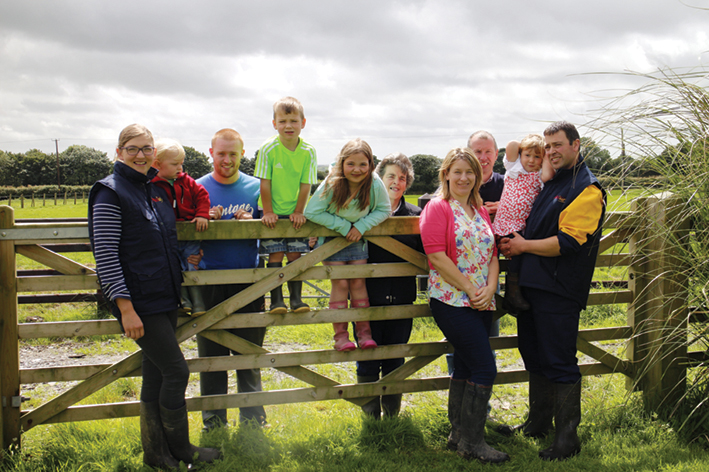 The family make all their own silage with high quality results - an average 30% dry matter, 11.3 ME and 15.5 protein - and they are aware how quality can be affected and so sample regularly to give them the most up to date information.

“Weather can affect both grass and silage quality so much,” explains Joy. “A week late in cutting first cut can have a huge effect on quality and a few days of dull wet weather will affect grazed grass quality. We need to have complementing feeds that will provide consistency when the cows require it.”

Nigel and Joy had grown a lot of whole crop wheat in the past but they have moved to producing more crimped barley, and this year they harvested 30 acres.

“We grow barley for crimping as a good source of starch, and as we outwinter some cattle it allows us to harvest earlier and establish a crop of forage rape,” Nigel explains. “We try to make good quality grass silage and began to realise that while wholecrop does complement the diet, and proves useful for periods such as turnout - when cows face quick growing new grass - we didn’t need as much of it as we were growing.

“With barley we also benefit from the straw; reducing what we have to buy in,” he explains.

Last winter Nigel and Joy had an issue with the crimped barley, which resulted in them seeing a large amount of undigested grain coming through in the cows’ dung.

“It’s incredibly frustrating to see grains passing through the cow in such high quantities,” says Nigel. “You’ve taken the effort and expense to grow the crop and you know it’s being wasted. While washing down the parlour you could see the grains in the dung. I sieved the cow’s dung and found upwards of 80 grains in each pat. The cows’ dung looked loose and almost fizzy in appearance, which suggested the cows might be suffering from acidosis – you could certainly tell that something was not right in the rumen.”

Mathew Van Dijk, from Bibby’s, who works with the family, suggested putting Actisaf live yeast into the diet.

“I’d seen other farms use Actisaf to help improve rumen function and thought it could make a real difference at Parcymarl Farm,” says Mathew. “Keeping the bugs in the rumen healthy is key to rumen function and production, whatever system you are running.

“Rumen microbes require a low oxygen environment and for pH to be kept between 6.0 and 7.0 for optimum feed digestion. Actisaf live yeast works by using up oxygen in the rumen, which results in the growth of fibre-digesting bacteria and lactate–utilising bacteria, increasing feed digestion and stabilising rumen pH.”

Nigel and Joy used Actisaf live yeast in a Farm Pack and added 50g/head of Actisaf Farm Pack to the diet.

“By adding it in the feeder wagon they could make sure all cattle were receiving the correct amount, without having to worry about the amount of cake they were getting,” explains Mathew. “By consuming oxygen in the rumen Actisaf live yeast helped the microbes in the rumen that digest the crimped barley become more efficient, resulting in more utilisation of the grain as well as of the home- grown forage.”

As well as seeing a large reduction in the amount of barley grains passing through the cows, and the consistency of the dung improving, after including Actisaf live yeast in the diet, Joy and Nigel also saw butterfats increase. This can be attributed to the improvement in fibre digestion that Actisaf delivers by supporting fibre- digesting bacteria in the rumen. “We continued using Actisaf through the mid- grazing season, when we’ve stopped feeding the wholecrop wheat but the grass is still relatively young and it helped ease through that diet transition and stabilised milk fats,” Mathew explains.

“Before we did anything we sat down and calculated the financial benefit of adding Actisaf to the diet. It works out at a cost of about 7p/cow/day, but the cost is well worth it. We know the rumen is performing better, which benefits milk production and constituents, and has a knock on effect on fertility and health issues.”