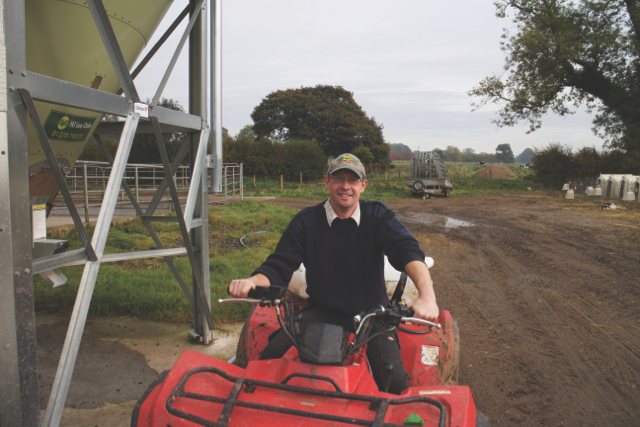 Within a week he’d broken his ankle badly but, Jon argues, it gave him the time to plan out the system he really wanted on the 550 acres at Friends Farm, near Whitchurch in Shropshire.

“We knew we wanted to move the 350 high yielding Holstein cows to a system focused on more utilisation of grazed grass and home grown forages and, with the liquid milk contract we are on, we didn’t want to compromise on yield. We also wanted to move to a two block (autumn and spring) calving system,” says Jon. “Being laid up gave me the time to plan out the rotational grazing system we’ve implemented this summer and plan as smooth a transition to the new system as possible.”

Jon knew he was changing the diet of the cows considerably when they went out to grass in the spring.

“I know the bugs in the rumen don’t like change,” says Jon. “It can take three weeks or more for them to adapt to new nutritional challenges, meaning optimising the forage in the diet can be tricky. I also knew we would be asking the cows to increase the amount of grazed grass in their diet in the summer and conserved forages in the winter.”

The rumen of the dairy cow can react badly to the variability that arises in grazed grass - from day-to-day depending on prevailing weather conditions and throughout the grazing season as grass quality changes - and to the nutritional changes that can occur when moving onto ensiled forages.

Philip Jackson, from HJ Lea Oakes spoke to Jon about these challenges and he suggested feeding the cows Actigraze, which has Actisaf live yeast as a key ingredient.

“The Actisaf live yeast in Actigraze works in a number of ways,” explains Philip. “It removes oxygen from the rumen and stabilises the bug population during those periods of diet change or nutritional inconsistencies.

“It also promotes the right kind of bacteria in the rumen - the fibre digesters and the lactate utilising ones - which stabilises the rumen pH. All of this leads to a more consistent rumen environment, ready to make the best use of the grazed grass, conserved forages and concentrates in the diet.”

Jon began to feed Actisaf before the cows were turned out around February 20th using on-off grazing when conditions allowed, and is so impressed with the results that he plans to continue feeding it across the housed period.

“We’re now heading towards an autumn block calving herd of 350 and a spring block of 150, and will be pushing toward 12 tonnes of DM/ha grown next year [includes grazed grass grown (not utilised) and baled silage taken as surplus, as well silage cut for the pit] with a long term aim to get to 15 tonnes DM/ha,” he says. “All cows have grazed really well over the summer. Yields are about 7,200 litres, with fat at 3.99% and protein at 3.27% and you can tell they’re keen to get out there and graze. What’s more, dung consistency has firmed up, a sure sign of a settled, productive rumen.”

Jon has crossed all cows and heifers to Norwegian Red genetics in order to benefit from improved longevity and fertility while maintaining the drive for grass-based yield. “Milk from forage stacks up economically for us and I need to know the cows can utilise the pasture and silage I put in front of them. The Actisaf yeast in the diet gives me that confidence and allows me to challenge the cows by reducing bought-in feed without sacrificing performance.”