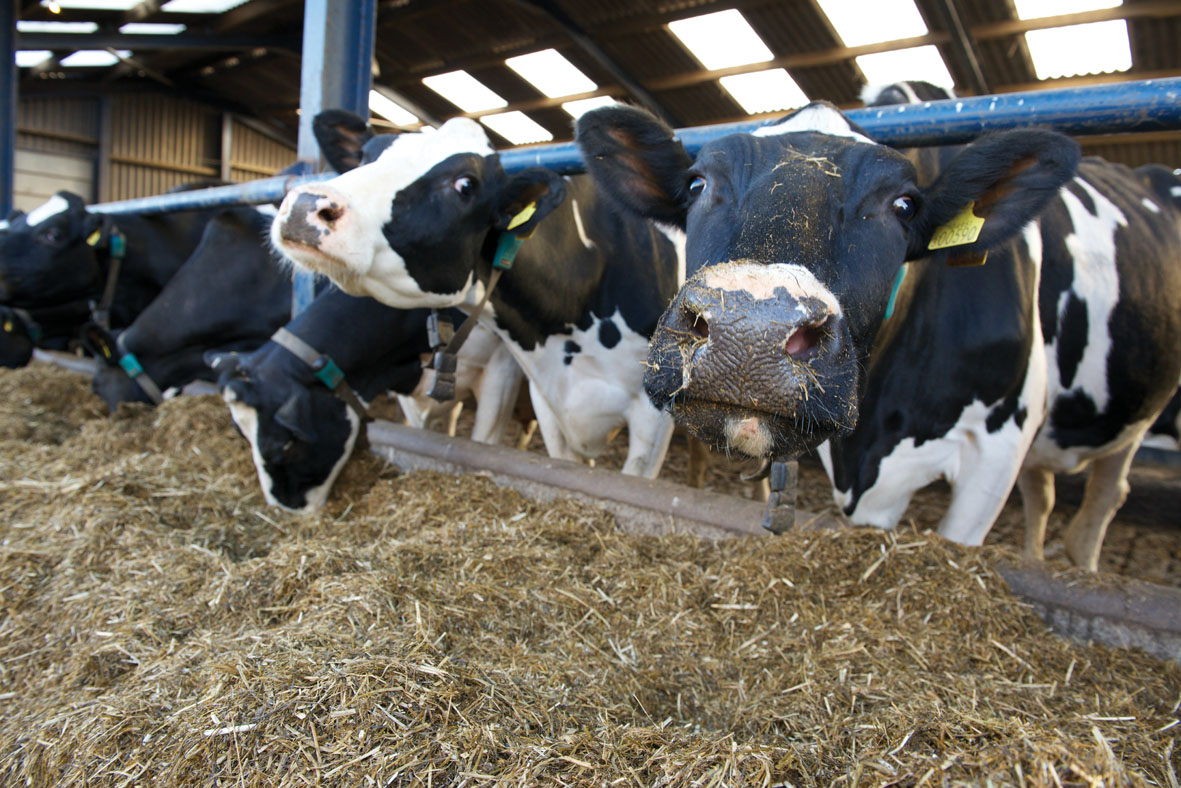 Diets formulated for performance will be high in fermentable carbohydrates and sugars and include  high quality forages, which tend to contain pre-formed acids and be low in structural fibre. Once concentrates are added these diets are acidogenic. Large amounts  of starch and sugar stimulate lactic acid-producing bacteria in the rumen, and the other rumen bacteria that normally use lactic acid cannot keep up with production, causing the pH of the rumen to drop below that for optimal performance, as lactic acid is ten times stronger than any other acid in the rumen. The optimal pH for the rumen is 6.0 – 6.5 and below pH 6.0 fibre digestion is significantly reduced. To help avoid acidosis, many nutritionists recommend feeding a buffer of some kind.

Buffers are compounds that help to counteract an increase in acidity in the rumen. The cow produces a natural buffer, saliva, which has a pH of around 8.4. She will produce somewhere between 10 and 32 litres of saliva per kg of dry matter consumed, with much higher saliva production when lots of roughage is consumed, as shown in the table below:

What this shows is that a cow fed a diet with only 30% forage naturally produces around 200g less sodium bicarbonate equivalent than an animal on the same level of dry matter intake, but with 70% forage in the ration. Because the low forage diet is likely to be more acidic as well, this compounds the problem in that the diet poses more of a challenge and the cow’s natural responses are diminished.

It is in these circumstances that additional help  is required! Some diet components have a natural buffering effect but it is also possible to add specific rumen buffers, such as sodium bicarbonate or live yeast to help control rumen pH. These are most effective when added to a TMR so that they are continually available to the cow. This also avoids potential palatability issues with some buffers.

How much buffer should I use?

Sodium bicarbonate is probably the most commonly used buffer and it is generally recommended to be fed at between 100 and 250g/cow/day.

But Actisaf Sc 47 live yeast also has a buffering effect and has other advantages too. Research comparing the action of 150g/day of sodium bicarbonate versus 5g/day of Actisaf has shown that both have a similar pH stabilisation effect, but that the mode of action is quite different.

Whereas sodium bicarbonate has a straight pH buffering effect, Actisaf has been shown to reduce the amount of lactate produced in the rumen (by converting lactate to propionate) and increase the activity of cellulolytic bacteria (and therefore fibre digestion) by strengthening the reducing conditions in the rumen.  In other words, sodium bicarbonate deals with the symptoms whereas Actisaf gets to the root cause of the problem!

This means that as well as stabilising pH as effectively as sodium bicarbonate, Actisaf also delivers improved feed conversion efficiency, delivering potential increases in milk yield for the same amount of feed consumed.

What’s more, this level of activity is delivered when only 5 grams of pure Actisaf are fed per cow per day – which means that a small quantity has a dramatic effect.