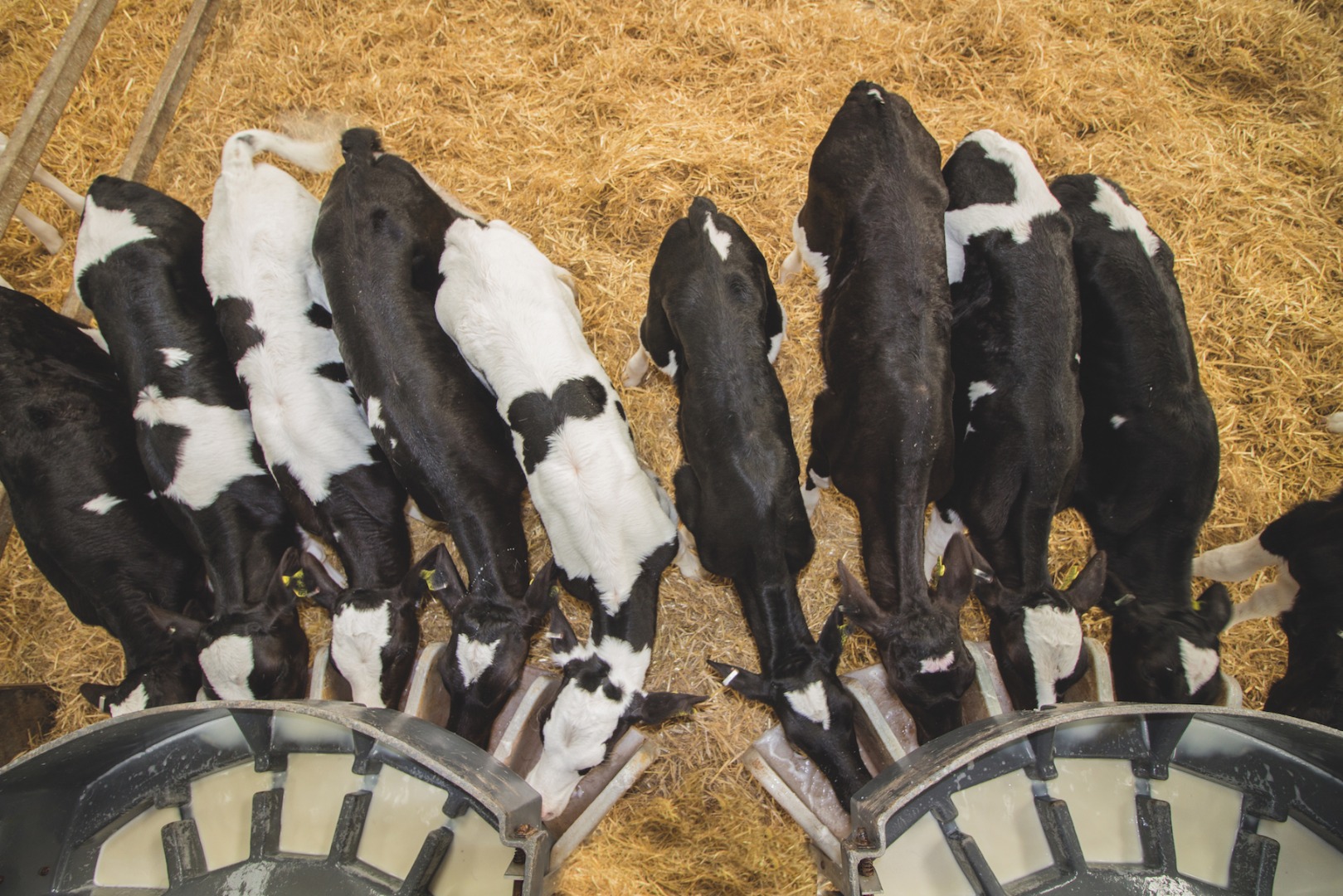 It is now widely accepted that calving at between 22 and 24 months of age reduces rearing costs and results in greater lifetime performance and reduced metabolic issues at calving, and so this should be your goal. The challenge is how to reliably achieve this, and the period from birth to weaning is seen as critical in a heifer’s development.

The target is for calves to double their birth weight by weaning at 8-10 weeks of age. For a 45kg calf at birth, this requires a growth rate of 0.80kg per day to reach a weaning weight of 90kg after 8 weeks. Farmers should adopt a policy of weighing calves at birth and periodically during the pre-weaning period so that they can measure their calves’ performance. Investing in a weigh crate or tape and getting into the habit of regularly monitoring calves will be money well spent.

Probably the most important part of calf management is getting quality colostrum into calves quickly and in the correct quantity.

- Test colostrum before use using a Brix refractometer.

- Do not pool colostrum.

- Typical feed rates are 4-5 litres per calf but will depend on IgG content. Feed colostrum as soon as possible after birth as IgG absorption rates reduce by 60 per cent 6 hours post birth.

- Don’t let calves suckle their mother as there is no way of knowing the quality or quantity of colostrum consumed, and there is a risk of contamination from dirty teats.

- Feed colostrum from calf’s own dam if quality is good enough and the disease status of the dam is ok.

- Good hygiene should be followed when managing colostrum to avoid pathogenic infection and colostrum should not be left in buckets around dairies or calf sheds for extended periods of time as this heightens the risk of contamination.

It is important to promote high rates of daily gain with milk replacer early in life but also not to over-feed as it can reduce or delay starter feed intakes, which are vital for rumen development.

- Current recommendations are to feed 6 litres of milk per calf per day, containing 125g – 150g of milk powder/litre.

- A 45kg calf requires approximately 380g of milk replacer (3 litres fed at 125g/litre) for maintenance alone, with any additional milk intake being utilised for growth.

It is vital to promote early intake of starter feed to physically and microbially develop the rumen so that the animal can start to digest fibre as soon as possible.

- Promoting high rates of starter feed intake is essential to produce Volatile Fatty Acids (VFAs), which are the result of rumen fermentation of carbohydrates. These VFAs, and specifically propionic and butyric acid, are vital for the development of the rumen papillae, which are essential for nutrient absorption from the rumen.

- Fresh starter feed should be fed daily and target 300g of starter feed intake by 3 weeks of age, of a feed that contains a high percentage of starch from cereals (from balanced sources of digestibility and degradability), high quality protein (with good levels of UDP) and low digestible fibre.

- In addition, current recommendations are to feed a source of forage as 4 per cent of total solid feed intake, chopped to 2.5cm and containing >65 per cent NDF (e.g. chopped hay or straw) as this promotes muscular development of the rumen thereby facilitating higher intakes of starter feed. A source of chopped forage will also aid rumination which will contribute to raising rumen pH above pH 6.0 and it also acts like a tooth pick for the developing rumen papillae

- The weaning process should start when the calf is approximately 45 days old and should involve gradually reducing the volume of milk fed daily, which should promote increased intake of starter feed. A typical recommendation is to wean Holstein calves once they are consuming 2kg of starter feed per head per day for three consecutive days.

Including Actisaf Sc47 protected live yeast in the ration provides significant benefits to calves during the pre-weaning stage. Through its mode of action, Actisaf reduces trace levels of oxygen in the rumen and creates an environment where the main cellulolytic bacteria will grow and thrive, thereby improving fibre digestion when it is already challenged by low rumen pH and enhancing the development of the core ruminal microbiome.

Actisaf also eases the transition on to starter feed, as it conditions the rumen microbes for the change in diet by biologically buffering the rumen and promoting a higher rumen pH through the stimulation of lactic acid-utilising bacteria. These bacteria reduce the build up of lactic acid in the calf’s rumen, which reduces the incidence of digestive upsets such as acidosis, which can greatly impact on feed digestion, rumen development and calf growth rates.

Feeding Safmannan, which is a premium yeast fraction, can prove beneficial to calves, and is particularly pertinent with the increasing focus surrounding antibiotic usage and subsequent resistance in calves.

Bouts of calf diarrhoea and respiratory disease such as pneumonia in the first 3 months of life have been shown to reduce heifer growth rates and to be detrimental to first and subsequent lactation yield of heifers when they enter the milking herd. Therefore, management and nutrition of the calf early on in life has long term implications and performance in the first three months of life can have a major bearing on first lactation performance of the heifer in the milking herd.

Safmannan is manufactured from unique strains of yeast under extremely consistent manufacturing conditions. Beta glucans and mannans - the functional properties of Safmannan – help support the immune status of calves, thereby supporting the defence mechanism to on-farm challenges. Safmannan can bind to pathogenic bacteria, which can result in reduced pathogen pressure for the young, vulnerable animal.

- Heifer rearing costs are the second highest cost on dairy farms after feed.

- Target to double birth weight by weaning at 8-10 wks.

- Feed high quality colostrum quickly - IgG of more than 50g/litre at a rate of 10 per cent of bodyweight within four hours.

- For best results, feed Actisaf and Safmannan in your calf milk replacer and starter feed.